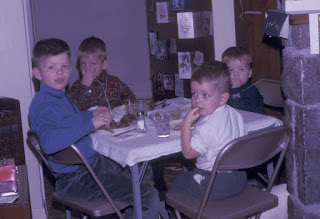 My cousin Paul died last Friday (March 8, 2013). He died after a long battle with cancer, a battle he fought in the same way that I remember him living his life, with a positive outlook and a stubborn determination to overcome.

He was the closest in age to me of all my cousins, only two months younger. We had not been very close these last many years. Recently we really only saw each other at weddings and funerals but it always felt like my aunts kept the family communication flowing, emails, letters, Christmas cards. He grew up in another city, not across the country but far enough that I only saw him in the summer and on special occasions like Christmas and Thanksgiving.

As we grew older we visited each other, alone and then with girl friends and wives but as our own families grew the occasion to visit grew fewer and father apart.

The thing is no matter where you are your family is still your family, blood is blood. He, like all my cousins, was always held close to my heart.

He was many things to many people, a husband, a father, an uncle, a brilliant carpenter, but in my still vivid childhood memories he was always fishing. It was the thing we shared each time we were together. The last time I spent any serious amount of time with him was after a wedding when he invited me to "the lake" to go fishing. Instead of two kids jumping in the boat it was two 40 year olds, laughing and joking, like no time had passed, just as we had always done.

It is those summers at my grandparents cottage, at "the lake", I will always remember when I think of him. I used to spent all my weekends at the cottage yet the week or two that he would visit, initially with his older brothers and, as we grew older, by himself, always filled me with exhilaration, exhilaration tinged with terror. Paul was the outgoing fearless compliment to my shy cautious personality.

In my mind he had no boundaries, no limits, there was nothing he was afraid to do or try. I always knew that the week or two I spent with him would cause me to push my own physical and emotional boundaries, to explore parts of the lake I had never seen, to go farther in the boat or through the forest than I thought we were allowed. Paul always assured me that everything would be fine, and it always was.

Our adventures always had something to do with fishing. Preparing to fish, trying to figure out where to fish, catching bait for the fish, or arguing about what bait would work to attract the fish today. I haven't fished much since but every time I pick up a rod or thread a worm onto a hook brings back memories of those summers on the lake.

We spent hours catching frogs because the biggest fish liked frogs. We boated out to islands we knew were covered with frogs. We paddled the canoe deep into the deerfly infested but frog filled swamp. We dragged the canoe across cat tails, filling it with one small frog after another. The fishing inevitably becoming secondary to the adventure that resulted during the preparation.

On one trip we caught two massive bull frogs, laughing, convincing ourselves that we would use them to catch the mother of all fish, wondering how hard it would be to cast them out into the water. As we paddled back, plotting our evening expedition, we noticed one of the bull frogs sitting quite contently in the bottom of the boat with two small legs protruding from its mouth. Paul was horrified and spent 5 minutes freeing the smaller frog. A frog he would subsequently put on a hook and feed to a fish.

His explanation was that you never knew if we would need that last frog to catch that last big fish.
We went on long walks through the forest behind the cottage, looking to find the deepest part of the frog swamp. A part of the swamp we could never reach in the canoe but were convinced held the mother lode of frogs and would keep us fishing for days. Fearlessly leading me over fences that defined the limit of my cautious explored, getting lost but obviously finding our way back, never actually finding the swamp but spending the day running and climbing and laughing.

We tried on several occasions to discover our own great fishing spot so we could be remembered in the lore of the lake, taking grandpa's small outboard to parts of the lake I had never seen and was sure grandpa didn't want us visiting. I would remind Paul of this occasionally, only to be met with a wide eye grin and polite dismissal. I look back and I am glad he never gave into my caution, I have many more tales to tell to my kids as a result.

At one spot on the lake where we were sure no one else had ever fished we hooked a massive Northern Pike. Yelling and screaming at each other, in sheer joy and more than a little panic we slowly reeled it in. As it got closer to the boat we began to realize how big it was. To our young eyes it was the biggest fish ever caught on the lake, we would be famous. As the beast approached the boat Paul reached out with the net to attempt to land it. With one shake of it's massive head, and I am positive a smirking glare from the eye closest to the boat, the line snapped and the fish slowly swam back into the depths. I was convinced Paul was going to jump in after it as he reached desperately with the net. We fished in that same spot until after dark, and then the next two days, determined to catch the monster, but it never returned.

My grandparents anchored our adventures, feeding us, when we happened to be near the cottage, cautioning us about boat safety, watching over us as we wiled away the hours between each fishing adventure swimming, playing cards or simply sitting in the sun and talking, but it was always the fishing that connected us.

Paul was fearless and in a lot of ways taught me to be fearless as well, or at least less cautious and for that I am eternally grateful. 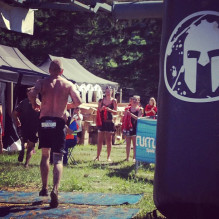